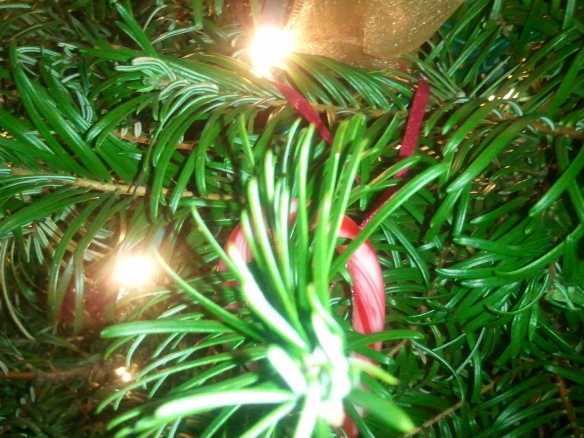 The sky was clear, and there was no snow or ice on the ground. It was a typical Colorado Springs winter… 70s one day, and freezing/snow the next day. This was one of the warmer days. And despite helping decorate for the Christmas party which would happen in a few hours, at the time Christmas was not in my top 350 days of the year. So I was feeling a bit bahumbuggish. So, as I interpreted the limits of the speed limit on my way home to get dressed for the party that I had helped decorate for… I became trapped behind slow cars.

You see, the car in the middle lane had a rear bumper that was barely hanging on. But suddenly the barely became not hanging on at all. The bumper fell off, hit the road, flipped in the air, and flew straight for my windshield. The bumper smacked my windshield diagonally. The full length of the bumper stretched from the top left of the windshield to the bottom right of the windshield… and this happened as I was driving 65-ish miles an hour (I had to slow down because of traffic).

And then the bumper bounced off and landed at the side of the road. I had a sudden flash of emotion. Which emotion? Gratitude to be alive? Relief? No…

Lots of anger. I unleashed a symphony of curses that would make the Incredible Hulk blush. This anger focused on the people with a piece of crap car who dared drive on the street when it was obviously a danger to other people. Idiots! Seriously, at least duct tape the bumper instead of driving with it dangling so badly. So I pulled off at the next exit and parked somewhere for a few seconds to calm down. I continued to say nasty things about the people who had been driving a pile of crap on the interstate!

Once I had calmed down I drove home, got dressed for the Christmas party, but I was in a bad mood and still irritated with the people. Should I even go to the party?Well, I checked my windshield before leaving for the party. I could not even see a scratch from the bumper’s impact. This was clearly a miracle. THOSE PEOPLE were lucky, because this was the best car I had ever owned, and if their crappy car had hurt my car… well, yikes… anyway…

So, I drove to the Christmas party, and I was in a bad mood because of the bumper incident. I shared my story with a few people at the party:

ME: Yeah, the bumper hit my windshield and bounced off.

ME: Yeah. I couldn’t get out of the way either because there were cars on both sides of me…

FRIEND: You’re lucky to be alive.

I had been so angry about the morons who did not even have the common courtesy to duct tape their bumper, that I never even considered this was could have been a near death miss. When that realization came to me, I left the party immediately and mildly freaked out in the privacy of my apartment. I am over it now… but I still remember it.

Some people have asked if it was a metal bumper or some type of fiberglass?… was it the whole bumper or only a large piece of it?… did the extreme slant of the Honda Civic windshield deflect the force of the flying bumper?? … etc. I don’t know those answers, which are all good questions. I can tell you the car in front of me was a piece of crap… I saw that car’s bumper barely hanging on … and then I saw the bumper bounce off my windshield.

Because of this incident my attitude toward Christmas has mellowed. Christmas is no longer in the bottom 20 days in the year. As a day it probably ranks somewhere in the 150s to 200s. I’ve even been able to go to some Christmas parties and laugh with friends and smile. So, my bahummbuggishness has been downgraded to a bahumm, and on some occasions it even gets a smile.Perhaps by the time I have kids I will be the type of dad who can make Christmas a magical time of year. If not, at least I will be rid of the bahummbuggishness which can ruin Christmas.

I am grateful to be alive and in graduate school. And I am grateful for my amazing, supportive, beautiful wife who is exploring the world with me.

Anyway, wishing you safe driving and a very Merry Christmas.

1 thought on “I Could Be Dead … and Merry Christmas”