Today I ran 1.36 miles. While that is not initially impressive, it is farther than I have run in several months. It is also the first time I have run since the spring of 2015. I have had a buffet of minor injuries, lingering colds, poor sleep, and allergies. Considering all the wildfires in Oregon this year, the allergies were intense.

Today my body did okay. But I clearly was out of shape. At least I did the 1.36 miles without stopping to walk. But it was slow going. A turtle could have beaten me.

Body: Captain, this is top speed.

Body: Actually, we’ve maxed out all the engines. We’re about to overheat.

On December 1st of 2013 I ran my first marathon, the Seattle Marathon. This was a bucket list item so finishing it felt great. However I appear to have a lingering injury on my right foot. Specifically the injury is within my right foot.

Although I am not a medical doctor I do not believe the foot is broken or fractured because the pain is not every day. Furthermore, I am not even sure if it qualifies as pain… perhaps discomfort is a more accurate and less dramatic description. It does not alter my ability to walk or stand and the discomfort is not a sharp/biting pain. The discomfort level feels more like a bruise that reappears every few days.

The foot injury is located right behind the toe joints for the middle three toes on my right foot. My guess is that this is plantar fasciitis, but that is just a guess for this foot injury. I have been resting since my epic December 1st marathon run in Seattle… yet this injury remains. This lingering injury has contributed to me not running since the marathon… and it existed a few weeks before running the Seattle Marathon.

Until I get this foot injury figured out I will not register for half or full marathons this year.

Because it does not hurt everyday I am unsure what to do… If my insurance paid for a physical therapist I would do that. What foot injuries have you had from running (or in general)? How did you treat them?

On December 1st I run my first marathon: the Seattle Marathon. Last Monday, eight days ago, I ran 21.2 miles. My goal was to run 27 miles but I overslept, and then ran out of time. I was really, really, really slow. Something happens to me during training. When race day happens, at least for half marathons, I have run much faster because of the adrenaline. But in training I have been unable to push myself to run fast. It’s like my warp core only comes online if there is a Klingon Bird of Prey in the area… or if I am actually running in a race. The difference between my training times and half marathon times has been dramatic… almost 30 minutes.

What is the difference? I don’t know. It is not a crisis… but it is a little frustrating to not be able to run faster in training. Theoretically if I run faster in training then I will run even faster in the actual marathon. My goal for the full marathon is to run the entire thing without stopping to walk. I can do that (unless I get hurt). However, can I truly count on shaving an hour off my training run for the actual marathon? I want to run the full marathon in under 4-hours. Even 3:59:59 counts! But… my best half marathon time is 1:54:45 at the Eugene Marathon. Doubling 1:54:45 makes sense mathematically. But doubling 1:54:45 does not make sense when you consider that was me pushing my body to its limits in a half marathon.

As I am in the final weeks of training, I am now faced with a dilemma. Do I say screw-it and just go for the time of 4 hours? This could result in my body having a complete break-down around the 16-mile mark… warp core implosion, thruster burnout, all shields failing… netting me a time of 6 or more hours as I drag myself across the finish line. Or… will my body hold up… and I finish in a time of 3 hours, 45 minutes? I have read stories about people who qualified for the Boston Marathon by accident because they signed up to do a half and ran the full marathon when they missed a turn. That is a mental “luxury” I do not have. I will not mistakenly run as hard as I can for a half marathon distance and accidentally run the full marathon.

As many of you know, I have been raising money for Womenspace through my marathons. Thank you for everyone who has supported me thus far. And there is still time to give a few dollars to help by visiting my fundraising page.

Thank you and have a great day!

On December 1st I run my first marathon. I have been training for over a year now. I currently have no knee, ankle, shin or muscle injuries. Last week I ran 18 miles without stopping to walk (although my time was surprisingly slow for me). By the end of October I hope to have run 26-ish miles at least once.

Today I am running 8 or 10 miles before I head to my graduate school for a few hours or work. Blogging has been difficult with me traveling (Washington DC), dealing with sick foster kids, running, studying, and not getting much sleep. However, my wife is happy… the foster kids are still alive, and I have not flunked out of grad school yet.

As many of you know, I have been raising money for Womenspace through my marathons. Thank you for everyone who has supported me thus far. And there is still time to give a few dollars to help by visiting my fundraising page.

Thank you and have a great day!

It was a grey, overcast morning… and as the bright orange vest of the parking lot attendant broke through the morning darkness… it became crystal clear that I was indeed awake. A zombie, but awake… and apparently driving in Canby Oregon. The mischievous minions working for Murphy’s Law were out in full force as I set out to conquer the Canby Dahlia Run on August 24th, 2013.

Murphy’s Law #1: I’ve had a cold for nearly a week, and two long colds for two weeks. I had a two week reprieve before the second cold hit… but hey, breathing is only minimally important for running a half marathon.

Murphy’s Law #2: My right leg is fully healed from a leg injury. However, that eliminated a few weeks from my training regime. Training? Who needs training for a half marathon? All I needed to do was run 13 miles.

Murphy’s Law #3: Our hotel in Canby was not good. We heard everything in the surrounding rooms, including the train. In addition, the water from the hotel tasted horrible, one of our room keys did not work, and the floor of our room was disgusting. It looked clean… but when we walked across the carpet barefoot, our feet were covered in in light brown film. Yeah, gross. A bright spot for the hotel… the people were really nice.

Murphy’s Law #4: DC, our pretty cool foster kid, did not sleep. Of course he picked the first night in 2 months to not sleep. I felt bad for our neighboring hotel people considering how loud DC was. In our defense, we could hear their televisions and sometimes heard them talking… so no one was really sleeping anyway. In fact, one of the neighbors woke DC up when one of them fell.

However, running a half marathon on an hour (or less) of sleep…. not ideal. With Murphy and all his agents at work… it was definitely an emotional, psychological, and physical battle that I did not expect when I first started training. Incomplete training, poor breathing, poor sleep…

But somehow… Hulk Hogan picked up Andre the Giant and body slammed him at WrestleMania. Somehow Luke Skywalker was able to destroy the Death Star. Somehow… Major “Dutch” Schaefer survived his rescue mission in 1987. And somehow… I finished the Canby Dahlia Run.

I was fortunate around the three mile mark to be running, and an older guy was running an decided to pace himself with me. We ran together for approximately 7 miles. Around the 10.5 mile mark, I thanked him for keeping pace with me up the hills and for most of the course… but that my pace was going to slow down. He told me this was the hardest part of the half marathon (in general, the last three miles). After 30 seconds he realized I was serious about slowing down, he maintained his pace and was soon out of my vision.

The Dahlia fields were nice, but I was a little disappointed to only run through/by them for a couple minutes. There were many farm fields that we ran past, but most of them did not have flowers. Or perhaps the flowers in those fields had already been harvested.

With all the cards stacked against me… how did I not stop to walk???

It was like Popeye throwing a punch after eating genetically modified spinach.

It was like Dracula having lunch at high noon.

It was like Robin battling the Joker without Batman.

It was like Superman flying while wearing a kryptonite necklace.

But somehow I ran 13.1 miles, yes the whole half marathon… without stopping to walk. My time was 1 hour, 58 minutes, 41 seconds. I did not win my age bracket. But I also did not collapse. 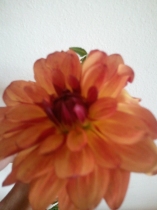