As a person I like to live life to its fullest… like running my first marathon in 2013. As a college student my resources are limited. However I do not let my financial limitations limit my life dreams… it just means I cannot do everything that I want to do this month.With that said I have been able to accomplish quite a lot since I first constructed my 2012 Bucket List.

I have completed six of the fourteen items I had on my 2012 Bucket List, including:

Although I feel like I need to redo the Washington D.C. trip because I was there on a weekend when the government was shutdown. 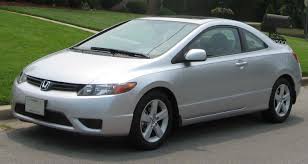 I miss my Honda Civic. It was a 2007 Honda Coupe, and when I took it for a test drive it only had 18 miles on it. The picture above is similar to the one I owned.

But now I am a graduate student, and my wife and I share a 1998 Oldsmobile.

My wife takes me to school in the 1998 Oldsmobile. We had to get rid of my Honda because it had a car payment, and we would not be able to afford it with me in grad school.

I can bike to school, but I live 5 miles from the campus… and there have been car to bike accidents in town which makes biking to school, especially five miles, feel unsafe. So my wife drives me. Most of the time I do not even think about the Honda Civic (aka, the best car I ever owned). It feels better to know the only debt we have is my college loans. And for our marriage it was financially responsible to get rid of the car payments, which I was falling behind on because they were so big.

Occasionally I got stuck on campus for a few extra hours, or had to go in early. But in general, I have not really thought about the Civic. And in general I have not thought as much about even having a second car.

So what prompted this sense of car loss? Last week, my wife and I went to Seattle for a bucket list event… we saw the Irish Rovers. She has wanted to see the Irish Rovers her entire life. Not only did we have front row center seats, we were able to get autographs and our pictures taken with them. It was amazing! And we rented a car for the drive because of the age of our car… and the car we rented was a Toyota Camry. It was similar to my Honda Civic, and I enjoyed driving it. That reminded me how much I miss my Honda Civic.

I am sure in a few days the sense of car loss will dissipate. But for now, I miss the independence of having my own vehicle, I miss how new the Honda Civic felt… and I miss how nice it felt to drive. Dear Honda Civic, whoever is driving you now… I hope they appreciate you as much as I did. Miss you!

While traveling to the Philippines I had time to think about things I want to accomplish in my life. Not having access to television frees up a surprising amount of time to think when you are an American. Although I did really, really, really miss the entire 2012 Olympics.

Anyway, here is a list of things I want to accomplish in 2012.

My wife and I have tickets for the Irish Rovers in November. This may not seem like a big deal, but my wife has wanted to see them perform live for most of her life. She had a couple opportunities before when they came to the U.S., but she missed those chances for various reasons. They are a Canadian band that occasionally plays in the U.S. So when we saw they were going to be near Seattle… I got the tickets.

**My wife always wanted to see a bald Eagle in the wild, but she did not see one until this year in the Northwest. Did we see it at one of the parks we visited looking for the Bald Eagle? Nope. She saw it fly across the highway while she was driving… she almost wrecked, but she finally saw a Bald Eagle flying and it was not in a zoo.**

4. Begin Training for a marathon

I want to run at least one marathon in my life. It’s just a goal, something to do. I have never wanted to sky dive or climb to the top of Mt. Everest, but running a marathon is something I want to do. I am targeting the 2013 Seattle Marathon. END_OF_DOCUMENT_TOKEN_TO_BE_REPLACED